Not what we expected but, the good news is….

We left home an hour earlier with a great send off from Brian, Sherry and our cheerleaders Anne and Betsy (with pom-poms in hand).

And the good news was..
… even though the Harley shop had their annual BIG BASH and the parking lot was full of people, their staff were excellent. They showed Rick how to disable the alarm and provided a temporary fix so the hydro-lift would not damage the front tire.

And the good news was…
… when we stopped one and a half hours into the drive for an early bio-break, Rick had time to complete a visual check of the rig.

So when he saw black smoke coming out of the RV wheel, we called the Coach-Net emergency road side assistance. They sent us down the street to the local Les Schwab tire store.

And the good news was…
… when the technician told us that he could not fix it and that it was not safe to drive, he offered us his parking lot in which to camp until Monday morning when the RV repair place opens. They even offered for us to hook up to their power after business hours.

So we unhooked the rig and parked the a beautiful view of Mt. Si

And the good news was…
… when we drove the Harley home (so we would not have to deal with the headache of fixing it on the road), Rick was drenched in the downpour, we hit 15mph traffic on I-5 but were able to pick up the lettuce that I had forgotten at home.

So we settled down to a good night’s sleep about 9:30pm. We were pooped!

And the good news was…
… I wasn’t wearing my ear plugs so the noise from the roof leaking woke me up immediately and we caught the leaks before they flood the living room.

So at 3:00am, we hooked up the rig and moved it under the Les Schwab awning. 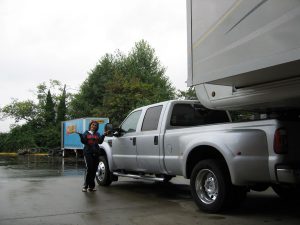 And the good news was…
… the leaks stopped immediately and we slept for another couple hours.

So we will be camped in North Bend at least until Monday.

And the good news is…
… we remain in excellent spirits, have laughed a lot in the last 24 hours, and are safe and sound. We even have time to catch up on email and take a nap. It’s raining again today so we’re not planning to hike up Mt. Si, but we plan to take a walk into town. We hear they have a great burger joint.

So far, Rick and I have kept up our positive attitude by looking at the good parts of the events. We’ve said to each other countless times “and the good news is…” as event have unfolded.

About 70 miles from home

The City of North Bend was originally platted as “Snoqualmie” in 1889. The community later became known as Mountain View and finally, due to the location near the bend toward the North of the South Fork River, became the Town of “North Bend”. The City incorporated on March 12, 1909.